why i’m scared of writing

You know what scares me? Writing. It’s what I do for a living, and people sometimes say I’m good at it, but I’m terrified to do it each time in case this time it’s rubbish. I can’t think of opening a blank document, staring at a blank page. The pressure to be extraordinary is too much.

William Golding said of his writing, ‘I can only just do it, you know.’ That has always been me. I am always at the very edge of not being able to write; many times when I could write, I don’t, because I’m scared; so that the times when I do write feel like they have been clawed back from a precipice. I can’t imagine being prolific.

It’s the infamous, the terrible, the greatly-to-be-feared NaNoWriMo: National Novel Writing Month. Write a novel in a month! The tagline: Thirty days and nights of literary abandon! I am not the kind of person who could do that, I don’t think. I am about as far from that kind of person as it is possible to get without actually falling over.

But a story of a thousand pages starts with a single word. How could it ever be otherwise? A lot has been written about how important it is for writers and other artists to overcome their fear of failure, and just write. I realised recently that I always assumed that one day I will be able to ‘just write’, one day I won’t feel this crippling fear, one day I will not be a person who is afraid to write in case they get it wrong.

More and more, however, I don’t think that day will ever come; and more and more, I realise that that’s not a disaster. Being scared of writing is not the same thing as not being a good writer. I won’t say it’s a necessary precondition – although some have said that – but the one certainly does not exclude the other.

I’m in good company, though. I read a great story about James Joyce. Apparently one day a friend called round to see him, and found the great man slumped on his seat, in complete despair.

Friend: What’s up? It’s the writing, isn’t it? How many words have you written today?

Friend (knowing how JJ worked): That’s quite good for you, though.

JJ (howl of anguish): But I don’t know what order they should go in!

Another version of this story has JJ howling ‘But I don’t know whether they’re the right ones!’ Either way – I feel his pain. And the opposite is true as well, I expect: that many bad writers feel no fear whatsoever of writing.

I remember when I had just passed my driving test: for the first year or so that I was driving, I was scared each time I walked towards the driver’s door. Scared that I would forget how this machine worked, scared that someone had seen fit to put me in charge of a ton of metal on top of an internal combustion engine, scared that all my practice and testing and experience would be for naught.

I talked myself through it. I’ve always been good at this: forcing myself to fight down the fear of a fear-inducing physical situation, forcing myself to put emotions to the side and concentrate on what needs to be done. So it was that I got into the car each time, sat behind the wheel, and did what I had been taught to do. I turned the engine on, put the car in gear, indicated, released the handbrake, lifted the clutch, drove. Each minute that passes without a disaster is one more minute of successful driving. Eventually, imperceptibly, I got more confident. Today, when I drive almost every day, I barely remember what that fear felt like.

Writing isn’t the only creative thing I do. I also do calligraphy and typography, sketching and drawing new letterforms, new ways to write a word, new ways that the letters fit together. In my typography work I have never felt a fear like my fear of writing. I do typography because the shapes open up in my mind, appear before my eyes when I’m watching a film or talking to someone or reading a book, because I have to transfer their shapes from my head to the paper. 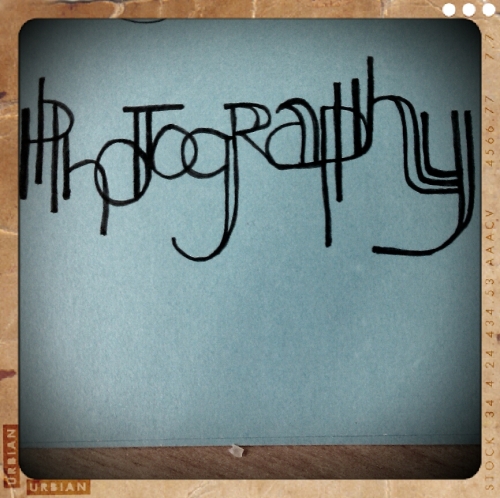 I don’t know why I am not scared of getting that particular form of creativity wrong; but I have a theory. I’ve always been a reader, addicted to words, living inside books.

In a world full of audio-visual marvels, may words matter to you and be full of magic.
Godfrey Smith

Because words matter to me more than almost anything else, I have a responsibility to get them right. I love typography, but it’s not my first love, so I suppose in a way it doesn’t matter to me so much that what I contribute to that world should be the best it can be.

Philip Larkin, one of my favourite poets, was asked why he wrote poems.

I write poems to preserve things I have seen/thought/felt (if I may so indicate a composite and complex experience) both for myself and for others, though I feel that my prime responsibility is to the experience itself, which I am trying to keep from oblivion for its own sake. Why I should do this I have no idea, but I think the impulse to preserve lies at the bottom of all art.

Maybe it’s that responsibility that is the thing I’m most scared of. I’m getting better, though – writing more, and just as with driving, the more I do the less scary it is. Stick with me, I’ll let you know how it goes..

77 responses to “why i’m scared of writing”